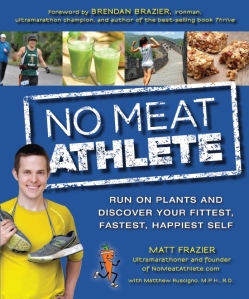 No Meat Athlete was a blog that became a brand that became a thriving business for Matt Frazier, an applied mathematics PhD student and amateur marathoner. It began as a chronicle of Matt’s quest to qualify for the Boston Marathon after switching to a plant-based diet.

Nutrition and fitness blogs are rarely sustainable businesses. The sector is over-crowded, trend-driven and audiences are fickle. No Meat Athlete succeeded where most fail thanks to Matt’s inimitable voice. He tells readers everything they need to know in just three sentences: “You’re not here to be preached to. And I’m not here to preach. In fact, I’ll come right out and say that a plant-based diet might not be for you. But I’ll also say this: You won’t know until you try.”

The tone is frank, warm, equable, and non-judgemental. Matt makes no apologies for being neither a professional runner nor nutritionist. Instead, he addresses readers as equals and fellow explorers. He writes in the enthusiastic, endearing voice of someone who has discovered something brilliant and can’t wait to tell you about. No Meat Athlete has grown into a brand that includes books, running groups, merchandise and more but Matt’s voice hasn’t changed. He is still the excitable, passionate, chatty guy you want to go running with then hit the pub for a vegan beer ‘n’ burger afterwards.

In his own words:

You can run without being a “runner.” I did it for five years.

Even once I had run a handful of marathons and was close to qualifying for Boston, when I lined up at the start of a race among all these passionate runners, I still felt like an imposter.

I was just a tourist, doing what runners do, but without feeling like I really belonged.

Sometime during the training for my Boston-qualifying race, where I finally succeeded in breaking 3:10:59, something shifted in me.

Shortly after qualifying, when I was in that happy, weirdly cloudlike space you find yourself in after accomplishing something you’ve worked at for so long, I read Born to Run. And damn if I didn’t feel like a runner after that.

For the first time, I could say that I really loved running, not just as a means of staying in shape or for accomplishing goals, but for its own sake.

And so I became a “runner.” Quotes and all.

Practice: “You can’t recognize and then strengthen your voice if you don’t hear it—and hearing it in your head isn’t the same as hearing it spoken aloud. Get in the habit of reading what you write out loud. I print and read everything before I send something out and also whenever I’m feeling all snarled up in my organization.

Want to accelerate your voice development? Read out loud to another person without any feedback. This is utterly maddening to your inner approval junkie: “But what does she think about my writing?!?” The magic comes because you turn toward yourself and listen for where you are being true to what you wanted to say and where you’re skirting the truth, where you dug deep and where you skimmed the surface, settling for clichés. Of course, there are plenty of times when getting specific feedback from other writers is useful—but not when it comes to honing your voice.“ via Jane Friedman

Remember: “Style cannot be copied, except by the untalented. It is, finally, the distillation of a lifetime of reading and listening, of selection and rejection. But if it is not a true voice, it is nothing.” ~Mavis Gallant