What a story is about, and the conclusion it reaches, depends on how you frame it. 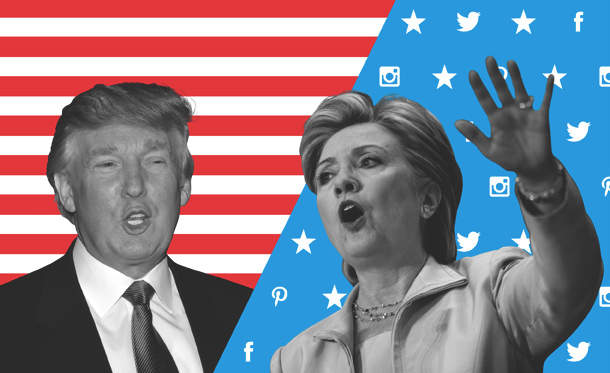 Respectively, the Democratic and Republican candidates in the 2016 American presidential election. Clinton won the popular vote by an unprecedented margin. Trump won the majority of Electors and is slated to become the next President of the United States.

The bitter, split decision presidential election highlighted the fact that there is no single “story”. What we think a thing means and what we believe about people and events, is drawn from a rich mass (or mess) of facts, ideas, information and preconception.

After last week’s storytelling post a reader rebutted my assertion that Hillary Clinton is “a experienced, qualified, sane, humane politician”:

Surely this must be qualified as “by comparison?” Isn’t it a fact that Hillary Clinton:

So, if Hillary Clinton wasn’t positioned against Trump and you judged her by her policies she would be a rightwing neo-con Republican.

I think perhaps you should also consider the story telling of the Clinton campaign which would argue that perceived racism and sexism are more important than real policies that have killed hundreds of thousands of Muslims in Iraq, Afghanistan, and other countries.

This is a perfect example of framing. My narrative frames Hillary’s experience and views as a positive; my reader highlights different, but equally legitimate, information that casts her in a different light. Trump can, likewise, be any number of things depending on how you frame him. He is either a robust example of American iconoclasm or a racist shit. He went bankrupt and made billions; the story depends on what facts you put in the picture.

“While reality itself does partly determine the meaning we assign to it, it doesn’t insist on any one specific meaning. So, while we all live in the same reality, we interpret it differently. Most of the time, the differences are negligible: at the day-to-day level, we agree sufficiently about most things. But some differences are radical. And that’s what politics is about.

Practice: “All I have to do is to write down as much as I can see through a one-inch picture frame. This is all I have to bite off for the time being. All I am going to do right now, for example, is write that one paragraph that sets the story in my hometown, in the late fifties, when the trains were still running. I am going to paint a picture of it, in words, on my word processor.” Anne Lamott, Bird By Bird

Remember: “One person’s craziness is another person’s reality.” ~ Tim Burton

Great storytellers hook their audience with a clear ethos, worldview, or proposition.

Freelance journalist Kat Lister has carved a successful career writing for publications including Marie Clare, The Telegraph, Huff Post, InStyle, Vice, and Broadly by championing the ever-contentious cause of women’s equality.

Journalists have flirted with starvation since at least 1891 (the year George Gissing published New Grub Street*). Modern multimedia journalism is unapologetically fuelled by celebrity and sensation. To survive journalists must be inimitable. Lister nails it. Everything she writes, from investigative pieces on Syria, to reportage on young Muslims, to think pieces on Brexit, “glass cliffs” and IVF is examined through lens of her feminism. Lister’s cohesive, provocative ethical stance, plus ferociously good writing, whets editors’ appetites, and has prompted 40K shares and 140K Facebook Likes (and counting).

In her own words:

I write about women and culture

Practice: “Put yourself at the center [of your stories], you and what you believe to be true or right. The core, ethical concepts in which you most passionately believe are the language in which you are writing.” ~ Anne Lamott

Remember: “There may be times when we are powerless to prevent injustice, but there must never be a time when we fail to protest.” ― Elie Wiesel

*Free on Kindle: Amazon.com  and Amazon.co.uk